Today, my company was suppose to put out a press release about how we are helping aspiring writers, who are members of an eligible Greek-letter organization, to expand their reader base by joining forces with the National Greek Awards™.

I was really looking forward to sharing that with all of my Greek-Life friends and colleagues. Sadly, a temporary cloud decided to rear its ugly, but not unfamiliar head, and I felt it necessary to first shine a light on and through that darkness.

I cannot remember their name, but there was a comedian who said that yes, Rev. Dr. Martin Luther King, Jr. was all about non-violence, but if you drove down any street named after him, there would definitely be some violence going on.

Unfortunately, it seems the same goes for racism on any MLK Day.

I’ve noticed over the years how racism seems to get turned up on the day of one of the most non-violent, prominent figures in American history.

It is as though the privileged feel attacked when they are reminded of the atrocities of slavery, genocide, and oppression done by their ancestors and the American economic, political, judicial, and ‘law enforcement’ systems that both directly and indirectly perpetuate those atrocities to this day.

And those of the privileged who are fueled to the fullest by the depths of bigotry and misdirected rage seem to use MLK Day as their own day to “Purge.”

But now they do it digitally.

On MLK Day, I was watching this video online of The Young Turks®, with co-hosts Ana Kasparian, John Iadarola, and comedian Jimmy Dore. 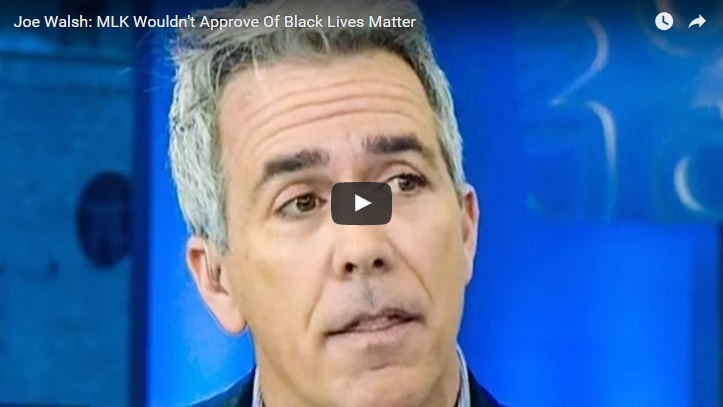 One thing that irritates me dearly is when someone is dismissive of things that matter to you. It hurts when a person about whom you care does it, but it can be very irritating when anyone does it.

In this case, what Joe Walsh did was simple:

(And speaking of cowardly…)

Joe Walsh irritated me so much to where I just kept recapping privileged individuals, over the years, attempting to tell the oppressed how, in essence, they should be Ok with being racially profiled, physically shot, economically mutilated, educationally downtrodden…just all-around disenfranchisement.

So, I took to Twitter® to make a quick statement directly to those from whom I’ve virtually only seen those types of statements come:

Yes, those are blanket statements about white Republican males. However…

…seeing the insane state of the current Republican Party and the absolutely racist and tasteless statements they make on a regular basis, not to mention the mob mentality of their attendees in attacking people of color at rallies for Republican political candidates, the reasonableness of my statements increases with each passing thought.

Surprisingly, to my statement, someone responded with an irony that even I didn’t see coming:

That definitely came out of left field. And, based on all available evidence, this response was from a white Republican male with the even more ironic Twitter® handle @DontHateMe069 (Man, you can’t write this stuff…Smh).

Now I’d sent the second of what were going to be my only two (2) tweets before I got notification of his first one. So let me show you the rest of the conversation (if you even want to call it that), with a little commentary on the side, so you can see how the whole thing went down in real time.

You might want to prepare to harness your rage. 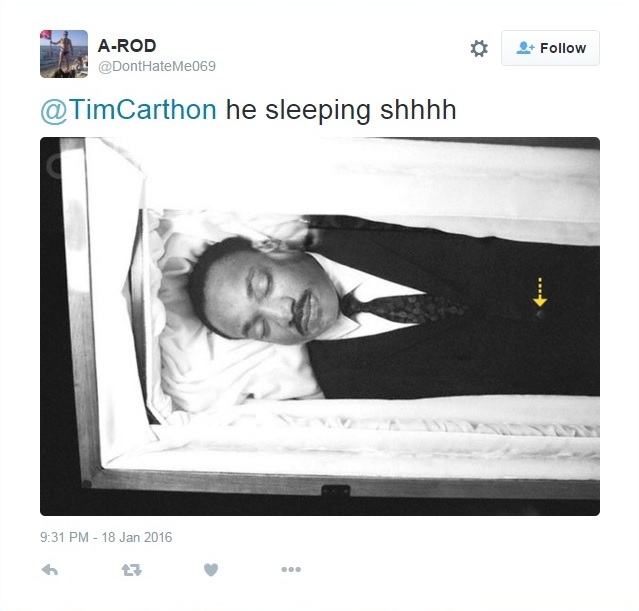 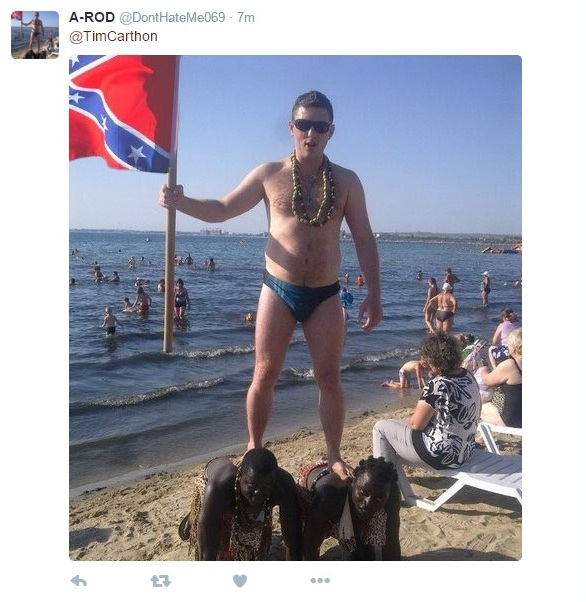 The crazy thing is that it was so over the top to where my anger turned over like a car that reached its maximum mileage digitally and just started over at all zeros.

That turned out to be a good thing because it tempered my response:

Now I think I did good. Hey, freedom of speech, even if it’s hate speech, right? Oh, but he wasn’t done: 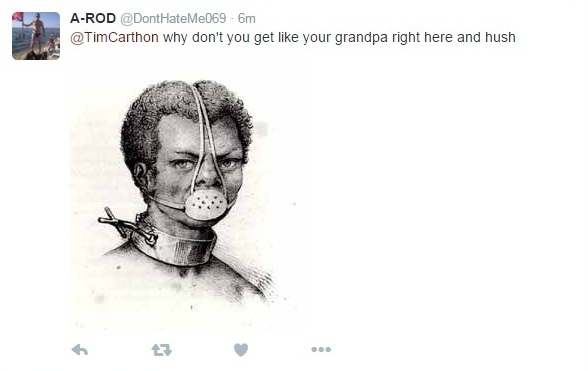 How sad do you have to be to have this level of hatred in your heart?

The depths of misery within this person would take multiple psychiatrists and psychologists to even begin to try and begin to diagnose, but, again, he wasn’t finished.

He responded specifically to the second part of my original tweet:

A walking, talking target? Was that a veiled threat?

Before I could respond, another white gentleman tagged me out, jumped in right quick, and threw a 98 mph fastball at A-Rod that he didn’t see coming, and hit him right upside his bigoted head:

PLEASE NOTE: I don’t begrudge work at Golden Corral® or urinal maintenance, and I don’t think Scott does either. They’re both an honest day’s work. However…

…I do see and appreciate him trying to make a point about and an attack on “A-ROD” and his idiocy on my behalf, even if he more-than-likely inadvertently used the wrong verbiage. Thank you for that, Scott.

(Tagging back in, I jumped back on the pitcher’s mound):

Now I was being symbolically tongue-and-cheek when I made that last statement. No actual white person works for me.

That was a symbolic statement about me actually being my own boss and not working under anyone and thereby putting myself in the position to have someone of what he definitely sees as his “superior race” working under me.

(From the movie “The Last Dragon”)
Sho’ Nuff: “Who’s the Master?“
Me: “I am. I AM! HAHAHAHAHAHA!”
(Cue the awesome Bruce Lee-style special effects!) 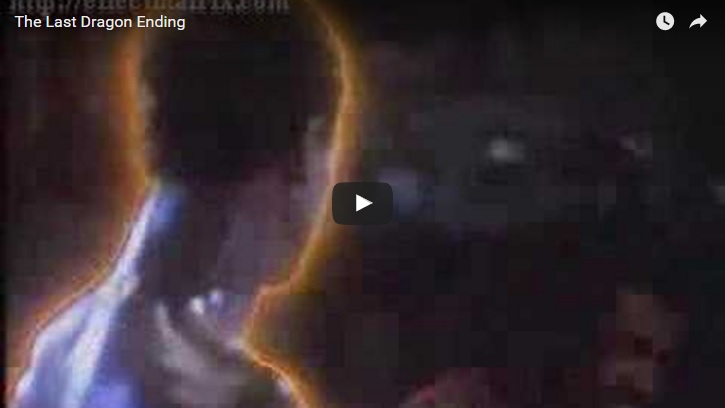 So, having had his tongue tied because he bit off more than he could virtually chew, I went in for the kill: 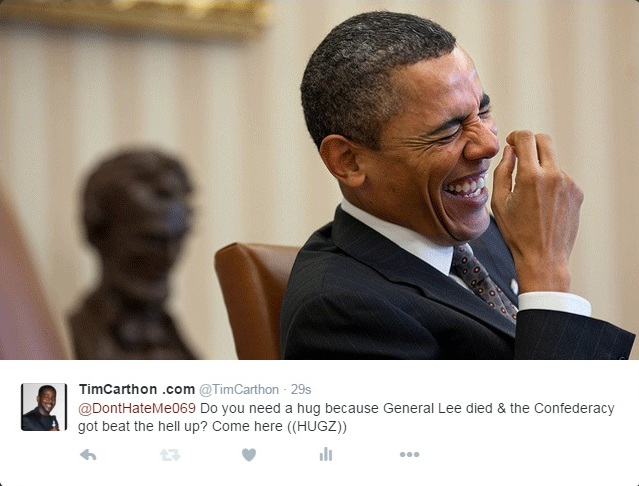 Kill him with kindness…and humiliation. Nothing like the meme of:

So now that he was thoroughly vanquished, I wanted to see who this ‘Twitter® Troll‘ was. And wouldn’t you know it? 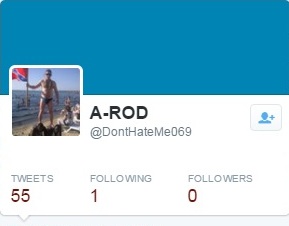 He probably made it in order to protect his anonymity, since he knew the racial hatred inside of him and it, like an energy drink, fueling what he was planning to say was going to stir an online anger pot against him.

Yep, they were definitely right. It’s really easy to talk tough when you’re behind a keyboard. That’s pure ‘Internet gangster‘ stuff right there. However…

…to actually hide behind the safety of your computer, but then not even stand up for your own words when you’re behind that computer? Cenk Uygur, co-founder and host of The Young Turks®, said it best:

Can you tell I was excited that someone with an even larger audience and platform than mine said what I’ve been trying to get across to people for years?

…like the Rev. Dr. Martin Luther King, Jr. and so many before and after him, I have The Audacity of Hope that we shall overcome some day.

We have to completely agree with Floyd Mayweather, Jr.

He’s the best fighter, ever.

Now, I’m a huge Floyd Mayweather, Jr. fan. We don’t hide that at all. However…

…I’m a much bigger fan of the truth, and whether his opponents were bigger or smaller, faster or slower, younger or older, more experienced or less experienced, champions or contenders, he not only beat them, but he beat them with an almost +30% average connect percentage.

Half the time, after the fight, he didn’t even look like he’d just been in a professional boxing match! That’s because, simply put, he was better than everyone who entered the ring to fight him, period.

He was so much better to where out of 69 judges’ scorecards, he only ever lost on one (1).

Look at his ‘loss, draw, no contest’ record in comparison to these current and future Hall of Famers:

As you can see, Rocky Marciano is the only universally considered ‘great fighter’ to hold the exact same record as Mayweather (49 wins, 0 losses, 0 draws, 0 no contests), but with one significant difference.

Marciano got routinely pummeled in the ring, whereas Mayweather will probably go on to be universally considered the best defensive fighter of all time.

But he’s more than that.

In the age of constant entertainment, Mayweather has the top four (4) highest grossing pay-per-view boxing matches in history.

He is the first boxer to ever make over 9 figures in one fight in history.

He secured the most lucrative deal in boxing history.

He has made over $700M in his boxing career, more than any other boxer in history, and is the highest paid athlete in the world three (3) years running.

But he’s more than that. Much more.

We all know that greatness in boxing is more than your record, more than those statistics above, and more than money. However, if Floyd Mayweather, Jr….

…then it’s pretty hard to argue against those historical facts and statistics. Yet, we don’t think casual boxing fans care about that, and that has led us to one conclusion:

We are now convinced that Floyd Mayweather, Jr. has reached Christian Laettner levels of hate. And the $3.5M Bugatti Veyron Grand Sport Vitesse he just bought simply added fuel to the hatred fire.

If you don’t know who Christian Laettner is, then you’re probably not a college basketball fan, at least not a Duke University one (or one of its rivals).

Christian Laettner was so hated by the fans that it was scary. Why he was hated was not scary. It was Mayweather-ish, at least record-wise:

So, out of 24 total NCAA® Tournament games, he played in 23 of them and won 21 of them. Those are both NCAA® records.

Oh, you think that’s all? Not even close. Just look at his college basketball statistics from his Wikipedia page:

“For his career Laettner averaged 16.6 points and 7.8 rebounds per game while making almost half of his three-pointers. He scored 21.5 points per game his senior season, garnering every major national player of the year award; Duke retired his No. 32 jersey later that year. His career is widely regarded among the best in college history, and he is enshrined in the National Collegiate Basketball Hall of Fame.”

On top of that, he looked like the quintessential All-American:

If that wasn’t enough to make you hate him, in ESPN’s 30-for-30 Documentary, ironically entitled, “I Hate Christian Laettner,” his teammates spoke about how he used to taunt them in the locker room, especially Duke point-guard Bobby Hurley, which was more a kin to torture than taunting.

When your teammates hate you, you’re one of the top 10 greatest college players of all time, and you’re both getting to the Final Four® and winning multiple championships, that says a lot about you as a person, both good and bad. Take a look for yourself:

So why do we believe that Floyd Mayweather, Jr. has now reached Christian Laetner levels of hate?

Simply because, like Laettner in the college basketball arena, he played the villain and the boxing game, in and out of the ring, too good for too long.

If you’re too good and too cocky in the eyes of the masses, and then you stay there for an extended period of time, those same masses will initially cheer you, but eventually want to see you somehow, someway ‘humbled.’

Both fortunately and unfortunately, Laettner and Mayweather fit this mold all too well.

…although Christian Laettner played college basketball for Duke University from 1988-1992 and was one of the best to ever do it, he was universally hated then and still is to this day, and in that realm is where we believe he and Floyd Mayweather, Jr. will be symbiotically bonded for life.

20 years from now, there will be an appreciation for the genius of Floyd Mayweather, Jr., the champion. However…

…there will be no love for Floyd Mayweather, Jr., the man. There will be no holiday for the best fighter ever. For from the sound of his name will once again rise the memories of this current hatred, fueled by the once-in-a-lifetime greatness for which he will forever be imprisoned.