In a World Where Kindness is Decreasing, Being a…

On this day, I smile externally, yet am saddened internally. My heart is warmed, yet my stomach is sick. We have lost two great ones.

Bernie Sanders’ presidential campaign has essentially come to an end. And Tim Duncan has retired.

He is one of the most consistently great players to ever play the game. He is a man who doesn’t seek the limelight, but definitely a man of massive, precise action when he is forced to step into it. However…

…more than that, he is the epitome of a great teammate and a gentleman.

I’ve done a gazillion articles on the greatness of Bernie Sanders and, although this one is for Tim, just change the subject matter from basketball to politics and it speaks directly to the weight and magnitude of Bernie Sanders’ legendary record as well.

I think about Duncan’s career beginnings with one of the NBA’s greatest players, David Robinson, aptly nicknamed “The Admiral” for his leaderships skills and his U.S. Navy® service.

They were called the “Twin Towers” because of both their towering physical presences and their consistent representing of the league as two beacons of positivity and professionalism.

Robinson was a calm, but powerful force. He was also known for his gentlemanly ways and it seems that, through his mentoring of his ‘twin,’ it rubbed off on Tim Duncan very well.

Being a gentleman in today’s world; a world of self-centeredness and ridiculous fame-seeking, is a chore. However…

…Tim Duncan received the ball from The Admiral and did it like no other. Quiet. Focused. Powerful. Professional.

Wouldn’t it have been amazing for him to end his career with another championship, tying (for 6 NBA® Championships) NBA® legends Scottie Pippen and Michael Jordan, arguably the greatest basketball player to ever put on a pair of endorsement-laced sneakers?

Alas, it wasn’t meant to be.

That Royal honor was earned by a King and his Court of Cavaliers, where, in the spirit of Tim Duncan’s record-breaking career, they became the first team in NBA® history to come back from a 3-1 deficit to take home the Larry O’Brien gold.

That team was led by a legend-in-the-making, who, ironically, called Tim Duncan “the GREATEST PF (Power Forward) to ever play this game“. And, by the numbers*, it looks like he’s right:

• Since Tim Duncan was drafted, the San Antonio Spurs® have won 5 championships, the latest was just two years before he retired.

• Yes, since he was drafted, the San Antonio Spurs® have amassed the all-time record for most consecutive seasons with a .600 win percentage in the four major U.S. sports.

• Yes, since he was drafted to the San Antonio Spurs®, Tim Duncan is just the third player in league history to reach 1,000 career wins.

• Yes, since he was drafted to the San Antonio Spurs®, Tim Duncan is the only player in NBA® history to reach 1,000 wins with one team.

• Yes, he helped the Spurs to the best season record of their franchise (67-15).

• Yes, he became one of only two players in the history of the NBA® to attain at least 26K points, 15K rebounds and 3K blocks in his career (the other being the great Kareem Abdul-Jabbar).

• Yes, he is tied for most all-time All-NBA® Team selections (a whopping 15xs)

• And yes, he garnered both the All-NBA® and All-Defensive Team honors in the same season 15xs (the most in NBA® history).

• Yes, he averaged a double-double his entire career (19 points and almost 11 rebounds per game).

• Yes, he made over 50% of his shots his entire career (that’s insanely efficient).

• Yes, he is the only player to play over 9,000 minutes in the playoffs in a career in NBA® history.

• Yes, he is #1 in league history in both postseason double-doubles and blocks.

And don’t even get me started on his coach, being part of ‘The Big Three,’ and his team loyalty.

Tim Duncan was coached by the great Gregg Popovich for his entire 19 year career. Is there any surprise that they accumulated the most wins by a player-coach combination in NBA® history?

On top of that, alongside his teammates, NBA® greats and future Hall of Famers Tony Parker (PG) and Manu Ginobili (SG), they hold the NBA® league record for the most wins by a trio in both the regular and postseasons.

His loyalty matched his greatness on the court, as he finished his basketball career as only one of three players in NBA® history to spend 19 seasons with one franchise.

Can you say absolutely incredible?

And even more impressive, he got better as his competition got tougher.

However, the crazy thing is, even with all of that consistent, jaw-dropping statistical greatness, that is not the best part of him.

I’m told that one of the most difficult things for an individual to do is to stay humble when everyone around you is telling you that you’re the greatest thing has ever been created.

That level of constant praise can inflate an individual’s ego to the point of narcissism, and narcissists usually don’t bold well under years of public scrutiny.

And then you have Tim Duncan.

The antithesis of a narcissist and widely considered by most NBA® legends and the general public to be literally the greatest individual basketball player to play the power forward position in human history.

His response to such is the epitome of who we’ve come to know him to be.

And, because of this, his tribute that the NBA® released on the day of his retirement is almost as beautiful and as perfect a video as his game: 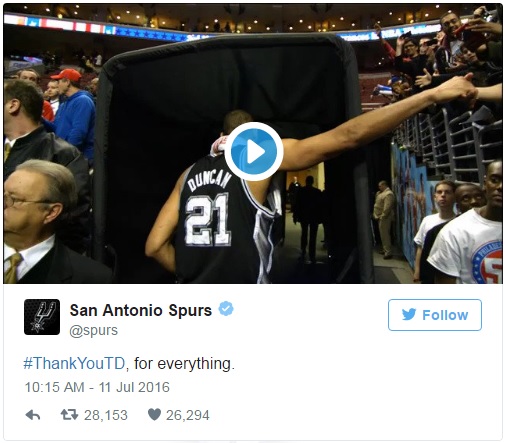 Humble. Quiet. Focused. Powerful. Professional. Could that video have been anymore quintessential Timmy?

Now, as he goes quietly into that good night, with the same class and dignity with which he played the game he loves so dearly for so long, inevitably landing him amid the halls of Naismith Memorial, his professionalism and grace will continue to resonate throughout basketball locker rooms for decades to come as the model for the new and a semblance of the old ways of sports team selflessness and duty.

So, Mr. Duncan, like Bernie Sanders’ legendary presidential campaign, rest in professionalism, for you have earned your retirement, as well as a place among history and humanity’s athletic and serene legends.